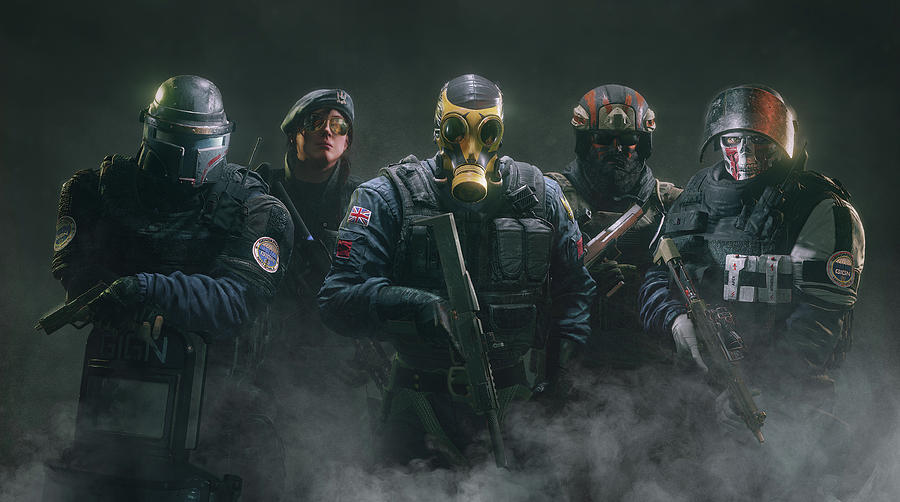 I’ll tell you right now, Rainbow Six Siege was not a game I thought I would ever get into. Not because it wasn’t well crafted and not because it had no potential to become a great game to play both casually and competitively, but because it resembled every other generic shooter on the market at the time. Call of Duty and Counter Strike came to mind whenever I saw it, and I just relegated it to that corner of gamedom I would never travel or even deign to notice.

But damn, this game is fun!

The many different ways to search for an opponent’s position, the slow and methodological style of peering around corners and checking room after room, the act of looking for traps and defending bomb sites. Rainbow Six is a far more cerebral game than I ever gave it credit for. This is not a mechanics heavy game; though it is still important to aim and click on the bad people until they die, this game prides itself on tactical and strategic gameplay.

Yet there is one glaring issue I have found within my short time with the game. One that has been there since the launch of the game a little over 4.5 years ago. One that is already visibly stifling the game’s potential creativity and tactical depth going forward:

If you didn’t know, or if you come from a background of arcade shooters like me, the dynamic of combat in Rainbow Six is that, barring shotguns, all weapons can one shot any enemy you hit if you happen to hit the head. This was an immediate red flag for me, as it causes all the following problems:

Let’s go through these one at a time, shall we?

The point of health in any game is to show how close to death you are using a continuum of how “healthy” vs “non healthy” you are: 80/100 health is less “healthy” than 90/100, etc. Every playable character (called an “operator”) in this game has 100 health maximum. But due to the one shot nature of headshots, the continuous and gradual utility that health provides is bypassed for a binary system. The effective health of every operator when taking one shot headshots into account is not 100, but 1, meaning the system of health is no longer a matter of degrees, but a simplistic “not dead” vs “dead” binary lever. As you would expect, this makes the very mechanic and purpose of health meaningless in this game.

But what happens when the game developers try to make it matter?

Let’s look at the operator, Blackbeard. All operators in this game have a unique “gadget” they can use to differentiate themselves from the rest of the pack, along with creating new tactical opportunities within the game. Many long time players consider Blackbeard to be the “worst designed” in the game due to his gadget: he puts a glass shield on the top of his gun to temporarily protect himself from shots to the head. This allows him to ignore the one shot headshot mechanic so long as the shield holds, while his enemies are still as vulnerable as ever to Blackbeard giving them a loving bullet round to the skull.

In essence, Blackbeard makes health matter again because his effective health is no longer 1, but is back to 100, while all other opposing players still have only 1 effective health, and this immense advantage is why many players hate Blackbeard.

Now you might think there is no way to combat this, but actually, there are quite a few. First, a defender can shoot his legs and kill him like any other operator. Second, they can flank him and shoot his head from the sides or back, bypassing the head shield. And third, his shield gives him reduced mobility and increased sound while moving, meaning doing the second tactic, along with simply outmaneuvering him is feasible. Yet despite these clear ways to deal with him, the playerbase still deems him far too “broken” and “overpowered”because the standard way of killing an enemy player of carefully peeking around corners is just not doable against Blackbeard.

This, in my view, is a clear admission of the playerbase that they understand how meaningless health actually is. But we aren’t done yet.

I bet if you play Rainbow Six, you might ask me what the problem is? Wouldn’t removing Blackbeard just solve this problem anyway? Well… no. Not only will health still not matter, but the “design scope”, or the options the developers are able to feasibly add into their game, is stifled due to the existence of one shot headshots.

Again, because of the binary nature of health because of headshots, abilities/gadgets that help in not being hit at all will win out over those that mitigate damage. This leads to many ideas for future gadgets and operators to simply not be feasible, and since this game is opting for adding 100 operators (currently they are at 54), more and more operator ideas will either be seen as “broken” like Blackbeard, or more operators will overlap to such a degree that they will obsolesce each other, due to the narrowed design space that one shot headshots bring.

In fact, the opposite of Blackbeard’s problem is seen in older operators from the launch of the game, Doc and Rook.

These two operators’ gadgets increase the effective health of every single operator on their team, either in the form of burst healing or equipping armor plates. But as I’ve shown, effective health could be double, triple, or even quintuple what it is now, and one shot headshots existing means none of that matters. In essence, Doc and Rook’s gadgets do literally nothing against any semi-competent player. Hopefully you can see the design scope of the game crumbling more and more simply due to the inclusion of this mechanic that makes any health buff useless on principle.

Of course, the playerbase will predictably say, “well change Doc and Rook’s gadgets too”. Ignoring the fact that in a character ensemble game, you want your characters to stick with some theme both in design and gameplay to be coherent and memorable, this just makes Ubisoft’s job harder than it needs to be, and punishes any sort of creativity around making operators that counter one shot headshots due to their immense power essentially causing any gunplay to centralize around them alone. In other words, because of one shot headshots, Ubisoft is not “allowed” to put any operator like Doc, Rook, or Blackbeard in their game, because the one shot headshot mechanic has dictated it so.

Relying on People to Screw Up

The last defense long time players will shout to me is the obvious fact that headshots, even for the highest tier players, will not be done consistently, therefore this factor of human error means health still matters. To this, I say the following: “No game should EVER be balanced and designed around human error.” This balance principle is how every good game designer and balancer should go forward when making and tweaking their game for a competitive market, because the inverse of balancing the game for people who are not good at the game leads to all kinds of problems so nuanced and intricate that I can’t go into detail on it here.

In that circumstance, a top player practicing getting consistent headshots can allow them to ignore, or partially ignore, all other needed skills to excel in this game. Increasing your headshot rate by 10% will always be far better for your ability to win than simply learning about 10% better positioning or using cameras for intel 10% more often. Why would you NOT practice getting headshots?

And while this situation has not been reached yet within Rainbow Six specifically -as I said before, it is a strategic game more than a mechanics focused game- it nevertheless is a small cyst of bad game design and balance festering within a great game in so many other regards.

It’s Not Even Hard, Guys

To close this off, I played Team Fortress 2 for about 7 years, and my worse class was Sniper, a character that relies on getting headshots to even be decent, and those don’t even always one shot players. I could barely ever hit any head, barring the stupidly lucky shots or enemies sitting still. Meanwhile I’ve played Rainbow Six for less than a week, and I’m able to get headshots accidentally by simply aiming at the general top of an enemy silhouette. So compared to other shooters, not only is getting a headshot in Siege trivializing a key mechanic, it also is trivial to perform! If a guy with the precision of a drunken bull on meth can do it THAT consistently, then imagine what someone who actually practices and plays this game for a living will do.